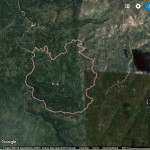 On the island of Haiti, there is a village called Plik.

When the U.S. president, Evil Homer, recently spoke dispagagingly of Haiti, word travelled to the village of Plik rapidly.

“He’s an evil version of Homer Simpson,” they cried. “Something must be done.

Some demanded an apology. Others just wanted a lock of his hair.

They must have obtained it, because before too long, President Evil Homer was beginning to show the effects of some terrible magic: his speech became repetitive, illogical, and disorganised, he started forgetting important things like which nations were allies and which enemies, he began firing anyone who failed to flatter him fulsomely enough, and soon he was trying to date his own daughter.

It became clear to everyone that the poor orange man was losing what few marbles he had to begin with.

Eventually, the voodoo took full effect, and the President went dancing naked through the streets whistling Dixie and sticking sprigs of straw in his hair. This was too much, even for a White House peopled by sychophantic kindergartners. They arranged for him to be taken away by some nice young men in clean white coats.

And the villagers of Plik who had criticised the presidency took credit.

Tours were organised, from the USA to Haiti, to shake their hands. There was much rejoicing throughout both lands.

Many said the Plik villagers were heroes.

Others, however, shook their heads sadly and said:

How cool is this? A Tip Jar, for coffee.