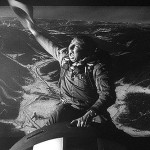 I find all this serious discussion and analysis of the latest bombing of Syria just fucking ridiculous. I don’t know anything about Syria, and neither do you. Nor do most of the journalists, or the commentators, or your friends on Twitter and Facebook who are certain there was no chemical attack in Douma—they may well be right about that, the point is, they’re guessing. They don’t “know”.

I have zero faith in the credibility of any sources (including the video below); we all should. There is just so much bullshit and propaganda everywhere; it is impossible to see behind the curtain, to see who’s pulling what strings. And it is impossible to begin to make sense of any of it until you admit your ignorance.

All I can see clearly is consistent accounts of an enormous amount of military ordnance and matériel getting used and I wonder who is paying for that, where the money is coming from, and where it is going to.

Because as far as I can figure out, modern warfare is not about politics, it’s about profits.

The strikes on the weekend were likely some kind of marketing exercise. Someone wanted to show off their new kill-toys, and now all the psychopathic world-leader kiddies will be lining up around the block to get theirs too, their cool new shiny kill-toy.

I am cynical enough to believe that is ALL it is about anymore.

I have zero credible information about Assad, nor could I give a fat rats arse about him; he is somebody elses’ problem. To form an opinion based on the level of bullshit we are constantly fed seems to me the height of arrogant stupidity. Syrians can have an opinion. They are there; they have to make decisions based on the reality they confront daily. So too their friends and neighbours … but everyone further away is just blowing hot air up your arse.

It is a vital and radical act to say: “I do not have enough credible information to form an intelligent opinion.”

Because think, in whose interests is it that we believe we’ve read enough op-eds or seen enough footage to weigh in on this and argue, argue, argue, pontificate, argue, argue..? While right in our own backyard we have psychopathic sadists torturing refugees, children, blackfullas, the elderly, the poor, the disabled and getting away with it, as all we know how to do is hold polite protests where all our anger is contained neatly within the signs we carry?

And doesn’t it set your bullshit meter clanging to hear the oh-so-serious pundits discussing the motivations behind every new atrocity as it they are the acts of rational–albeit cruel–actors? Most human moves are made out of panic and stupidity. Most things are mistakes. Most people are idiots, and that goes double for anyone who is so addicted to power that they’ve performed all the inhumane acts necessary to reach “world leader” status. If the pundits ever got up and said: “I don’t know what the hell they’re up to, it’s quite possible someone just pressed the wrong button,” or “could be because it’s a Tuesday, Anderson, he often gets low blood pressure this time of the week,” then I’d be more inclined to listen to their ‘expertise’. But as it is, I can take only so much of this po-faced gravitas before I want to go running down the street reminding people that Columbus thought Turtle Island was India, and Alexander Fleming discovered penicillin by forgetting to put his lunch in the bin before he went on holidays. Or that the Titanic sank because a guy lost a locker key. Or that the Berlin Wall came down because a politician fluffed a press conference. Or that Kennedy’s attempt to de-communise Cuba failed because the idiots forgot about the time difference between Cuba and Nicaragua, thus taking us into the Cuban Missile Crisis and nearly WWIII. But everyone prefers the version where Kennedy is the most solemn of statesmen who saved us from the evil Reds and would never, ever, mislay his sunglasses or his house keys.

People are moronic. They’re forgetful, they’re lazy, they’re greedy and they’re usually nasty with it, and the higher you go the nastier they get. Politics, and war, are more Yes, Minister than Thirteen Days; more Dr Strangelove than Black Hawk Down; more Veep than House of Cards. Or perhaps there are some films & novels we should be looking at to better place ourselves amongst this incessant, torrential, deluge of ‘information’… I recommend Wag The Dog, Tomorrow Never Dies, and Evelyn Waugh’s Scoop.

Forget it. Forget trying to understand the conflict unless you’re there and have first-hand experience. Turn your attention instead to who is making what obscene profits from the business of constant war, from these dreadnoughts and killer drones, and missiles with an IQ higher than the Minister for Women.
And to how can we turn their abominations around and point them towards their houses, instead of towards normal people who just want to have a nice meal and go out dancing and get their kids to school on time tomorrow?

And then to what do we have to do to ensure Peter Dutton loses the very marginal seat of Dickson so we don’t have to die knowing we let him become Prime Minister on our watch?

And how to not choke on our own guffaws watching the Daily Telegraph trying to paint Scott Morrison as loveable. (Does that mean he is Murdoch’s choice for the post-Turnbull leadership? That’s a terrifying thought. Of all the appalling, unethical, incomptent people in the Coalition, Morrison is arguably the worst.)

Now, practice saying with me: “I know nothing.”

Feels good when you get used to it. Because it’s the truth. 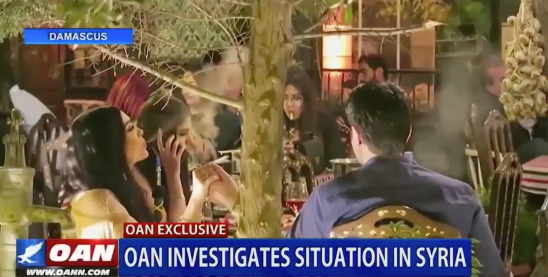 Inside Douma —click here for video, there were upload problems.

At least this guy is actually in Douma. OAN is a dodgy source of course, but Real Clear Politics is rated right-of-centre biased but mostly factually accurate by the media bias/fact checking sites I checked. And there are issues around this journalist’s politics re the election Trump lost, but he IS there, in Douma, and he is not trying to overwhelmingly convince you, just telling you what he found out. I have the unfashionable belief that being opposed to someone ideologically doesn’t necessarily mean they are evil, wrong, and lying about everything. (Fascists, white supremacists, and most of the current crop of Australian LNP politicians excluded, obviously. They ARE evil, wrong, and lying about everything.)
Anyway, at least this feller has a point of view other than the breathless warlust of most current media morons.

How cool is this? A Tip Jar, for coffee.